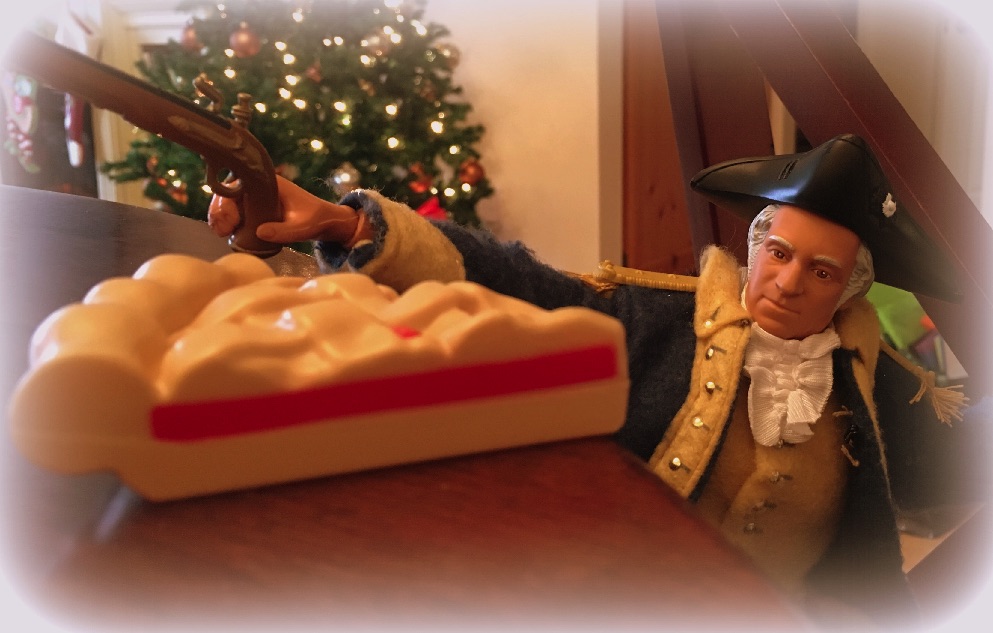 Most people know the story of George Washington crossing the icy Delaware River on Christmas night to launch a surprise attack at the Battle of Trenton. It was the first and best American Christmas story (until Die Hard) and an instant legend, changing the narrative of the war.

In November 1786 Washington’s war buddy David Humphreys sent his regrets that he would “not have the felicity of eating Christmas Pie at Mount Vernon” that year. Washington replied that Humphreys would be missed, though he lamented being deprived “of your aid in the Attack of Christmas Pyes.” (The final spelling of “pies” wasn’t nailed down yet.)

Side note for anyone who thinks Washington was a humorless bore: In addition to probable wenching and naming his dogs Sweet Lips and Drunkard, he actually used the phrase “Attack on Christmas Pyes” to describe holiday binging. He was cooler than we’ll ever be.

Washington went on to rub in Humphreys’ face what he had missed, “We had one yesterday on which all the company (and pretty numerous it was) were hardly able to make an impression.”

If these savory Yorkshire Christmas pies were a battle for the eaters, they were an all out war for the slave cooks who prepared them. This is how one recipe from an 1846 cookbook starts:

You know you’re in for days of preparation when the first step is basically “Murder most fowl.” Christmas pies pretty much required taking everything from the 12 Days of Christmas song and removing its bones. (Sorry lords a’ leaping.)

One Christmas pie in London in 1770 was reportedly nine feet in circumference, weighed 168 pounds, and required wheels to transport. The pies made at Mount Vernon weren’t quite that epic, but they must have been pretty massive to feed Washington’s posse.

I can’t help but feel comforted and inspired by Washington’s very different Christmases ten years apart, as if they’re a metaphor for the indomitable American spirit – sometimes you feel like you’re crossing an icy river and trudging through miles of snow, fighting for freedom and equality against a tyrannous regime in the middle of a heinous winter with no end in sight. So you take your lead from Washington’s playbook by being smart. By being a rebel. By choosing your battles, persevering, and never giving up. You get through the dark winter so you – so everyone – can someday get a piece of the big-ass pie.

That metaphor might be a little half-baked. But in the same vein as the bittersweet song “Have Yourself A Merry Little Christmas,” David Humphreys’ letters are a small reminder that some things are temporary and someday soon we all will be together, if the fates allow. A year after his absence from the pie attack of 1786, he wrote to Washington about rejoining the annual battle: “I am in full hopes of being on the spot this year to do ample justice to the Christmas Pye.”

Unfortunately the result of this rematch between Patriots and pie has been lost to history. I’d like to think they fought another valiant but unsuccessful battle, and the copious leftovers were shared with the people who boned dozens of birds to create them.

You may also enjoy:

Support the podcast and blog by becoming a patron and get exclusive content and extras!